Pink Think: “Rock is so much fun. That’s what it’s all about – filling up the chest cavities and empty kneecaps and elbows.” – Jimi Hendrix 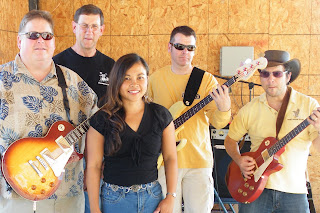 Okay, I’m gonna be really blasee about it, but this past Saturday, I, um, fronted a rock band.

To heck with blasee – it was pretty Amazing!!!!

***
I got up in front of family and friends and performed nearly 20 rock songs; mostly covers of classic rock songs and a few originals by other band members. Up to the very last minute, I was scribbling notes on my playlist for my between-songs patter. On the actual performance, the notes went out the window and I just winged it. I tried to deliver a joke but messed up the punch line, but people laughed anyway (maybe because of it). I got a couple of girls up to do back-up tambourines during Wild Thing.

I wasn’t as nervous as I thought I would be. How weird was that? Maybe because I had been “performing” every week with my band at practice, and when I finally got up, I thought oh, this is just like practice, except there are people watching me. And in some ways, it was actually more fun and easier to “perform” because I had a live audience.

***
The dazed expression on my mom’s face after my first rock-out song was priceless. I love my parents. They might not “get” the songs, but they went all out bringing refreshments and they seemed really proud of me.

And my husband and kids. My husband deserves a medal for being so supportive of such a crazy endeavor. He has been my number one fan, always telling me I am doing good and being my sounding board. And my kids deserve a prize, too, for still enjoying my concert in the audience even though they have heard me practice these songs ad nauseam and there was a playground next to the pavilion.

And then of course, there’s my band mates, who are such fabulous musicians that I could have just stood there and they would have made me look good!

***
I forgot some lyrics, which I just kind of mumbled into the mike until I recovered. But the good thing was, I kept singing. And I didn’t need to look at my cheat sheet as much as I thought I might need to.

***
Wow, this has been a pretty amazing ride. (If you want to read more about my rock band adventures, you can catch it all here.) I don’t know when our next gig will be, but I am open to more excitement – rock on!