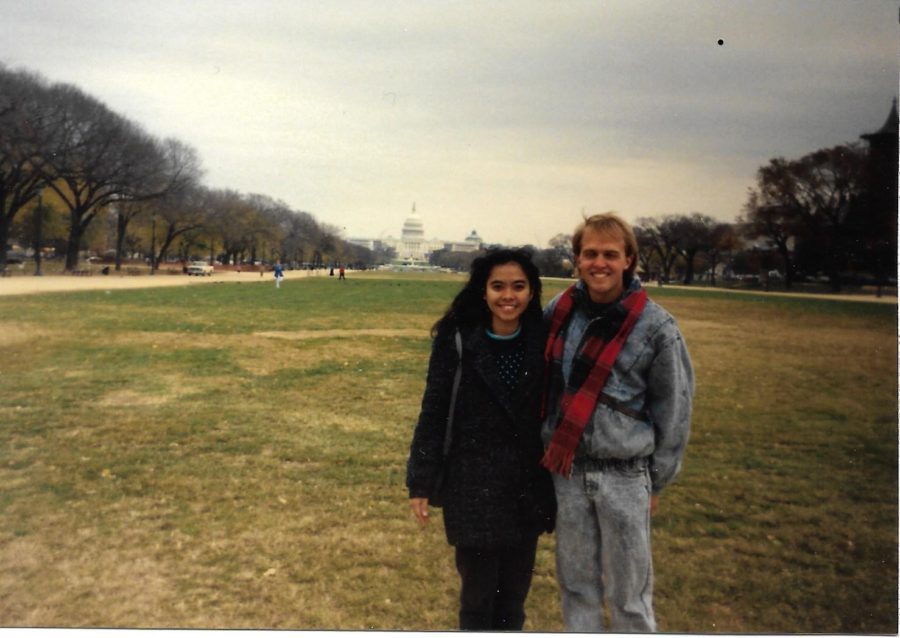 My then-boyfriend (and now-husband) Drew, and I, at the Mall in Washington DC, Nov. 1991. I was 20 and he traveled there for my baptism into the LDS Church. The following account is my conversion story.

“Don’t let the Mormons convert you,” a friend told me before I left the Philippines for Utah in 1987.

I shrugged off the advice. I was 15, born and raised Catholic. Our family was devout, usually sitting in the front row of the chapel every Sunday mass. As a teen, I liked to stop by an empty Catholic church after school just to commune quietly with God. Besides, I didn’t even know what or who the Mormons were. Maybe Mormons were like the Jehovah’s Witnesses who sometimes came to our door, giving me a magazine which I politely accepted but didn’t even look at.

That July in 1987, my mom was being sent by her employer to Utah State University (USU) in Logan, Utah, for a training. Being the only child home, I tagged along to America, staying at my uncle’s in L.A. for a few weeks before I joined Mom. Mom would work on her master’s degree while I earned my bachelor’s.

At the airport, a Caucasian lady with tightly-permed, short white curls accompanied Mom to pick me up. She had a soft voice that I had to lean close to understand, but once she enveloped me in her warm embrace, I liked her right away. Mom introduced her as “Mother” Rosa Croshaw, the mom of one of her fellow trainees. She had taken Mom in as though she were her own daughter. She was also Mormon. For the next four years, Mother Rosa and her family hosted us on holidays and helped with things like getting jobs and driving us around until we could get driver’s licenses.

A crash course on everything Mormon

Coming to USU was a crash course on everything Mormon. “Mormon,” I discovered, was a nickname for a member of The Church of Jesus Christ of Latter-Day Saints, or LDS Church. We went to what we thought was a “steak” dinner but turned out it was at an LDS “stake” building. Mormons didn’t drink nor smoke, something I personally appreciated, having come from a culture where both were prevalent.

Though it was fun getting to know more about the predominant religion, I resisted the idea of getting too close to them, with my friend’s words always lurking in the back of my mind.

Don’t let the Mormons convert you.

And yet, slowly, that was what happened. Oh, it wasn’t anything overt. No one cornered me and forced their doctrine down my throat. There was the return missionary who leaned over at computer lab and gave me a Book of Mormon with his testimony tucked in it. And the time when I worked as a chaperone to youth and sat transfixed listening to a Michael McLean LDS fireside. It was hard to not notice their positive lifestyle, living among Mormons like Mother Rosa for four years.

While traveling on Sardine Canyon one snowy winter night, Mother Rosa and her granddaughter were killed in an accident. The news hit Mom and me as though we had lost a blood relation. Broken-hearted, we attended their viewing and funeral. To my surprise, Mother Rosa’s grown children exuded peace and seemed to be doing more of the comforting.

As I wiped away my tears, I was bewildered. Hadn’t they just lost a loved one? Yes, they acknowledged, but they told me about the Plan of Salvation. Someday, they testified, their family would be together once again.

In the Catholic Church, the bride and groom vow to be together “till death do us part.” In that viewing for two very special women, I was intrigued with this Mormon principle of eternal families. Over the next several weeks, I met with a Catholic priest who tried his best to give me answers, but that only left me more confused.

In the midst of my spiritual confusion, I met Drew Allen, a Utah native who had just returned from a two-year LDS church mission in South Korea. Soon, our friendship turned into a deep affection. The only problem was, he was Mormon and I was Catholic. For a while, we took turns going to each other’s church. Though Mom liked him a lot, she was opposed to my investigating the LDS Church. Meetings with one missionary companionship after another eventually amounted to nothing.

Moving away and deciding for myself

In my last (fifth) year of college, I had an opportunity to work as an intern for Utah Senator Jake Garn in Washington, DC, that fall. I was excited. Not only was it a great learning experience in the U.S. capital, but I looked forward to taking a break from the tug-of-war between my Mormon boyfriend and my mom. I wanted to be able to attend church meetings without pressure from either of them.

On my long commute on the Metro  from Virginia to DC, I would read the Book of Mormon, slowly gaining a stronger testimony of its truths. About halfway through my internship, I got a chance to visit the Washington DC LDS temple grounds. As I sat there on that beautiful autumn afternoon, a familiar feeling of peace swept over me. I recognized it as the same feeling I’d had as I sat in empty Catholic chapels those afternoons my teen years. It was as though I found something I didn’t even know I’d been searching for.

Soon afterwards, I literally ran into Alice, a Mormon girlfriend of mine from USU, in the underground tunnel between the Senate and House buildings. Over lunch, I told her I had been meeting with LDS missionaries back in Utah and I was interested in meeting with them once again. That evening, Alice hosted LDS missionaries in her home. I told them about the influence Mother Rosa and her family had had on my life at USU as well as experiences that had made a positive impression on me about Mormons. Ultimately, I blurted out, “I think…I want to join the Mormon church.” My friend and the missionaries were understandably thrilled. Suddenly panicked at this unexpected turn of events, I said, “But I need to pray about it.”

Getting on my knees for an answer

That night, I got on my knees. I had never prayed harder in my life. Into the early morning hours, I alternately prayed, read scriptures, and played some LDS children’s songs on a cassette tape. As sunrise filtered through the curtains in my apartment, I was exhausted but calm as I received the confirmation: joining the LDS church was the right thing for me to do.

It was a Tuesday. I called the missionaries and agreed to be baptized the following Saturday. Drew was among the first of my friends I called. He was overjoyed. Though a little disappointed he couldn’t be at my baptism, he urged me to go ahead with it.

A few minutes later, he called back. “How would you like me to baptize you?” he said.

“You can do it over the phone?” I asked.

It turned out his parents thought this was such an important time in my life, they offered to buy him a plane ticket so he could be at my baptism. Mom, on the other hand, called me every night in tears, begging me to change my mind.

That Saturday night in November, I entered the waters of baptism, with Drew performing the ordinance. Afterwards, I called Mom, expressing my joy and assuring her that the family would remain important to me. She was subdued but resigned.

In July 1992, Drew and I married in a civil wedding as I had to be a member for a year before I could go through the LDS temple. The following November, Drew and I were married and sealed for time and eternity at the Salt Lake Temple. 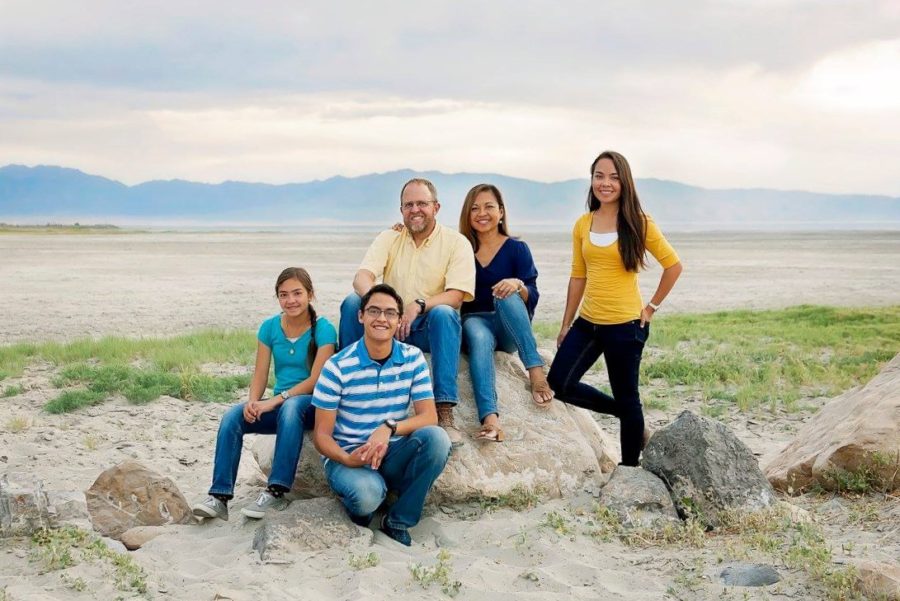 My family in 2016, the summer after our oldest daughter returned from her LDS mission and before our son left for his.

Over the years since, Mom and my dad, who would later join us in America, eventually accepted and supported me in my conversion. They often complimented Drew and me on our three children’s upbringing and were always supportive of their Mormon milestones, including serving missions. Our oldest daughter served a mission in my native Philippines. Until August 2018, our son is serving in South Korea, where my husband also went. Our youngest daughter plans to go on a mission as well.

Some people might wonder how I could let my children leave home for 18 months to two years to serve a mission, where we have phone/Skype contact only on Mother’s Day and Christmas, and weekly e-mails between. How could I not? Thanks to the missionaries who left their own families temporarily and friends who planted the seeds of the gospel in my heart when I was a college student, my family and I can enjoy blessings now and through the eternities. And for that, I am forever grateful.

To learn more about what Mormons believe, visit www.mormon.org.