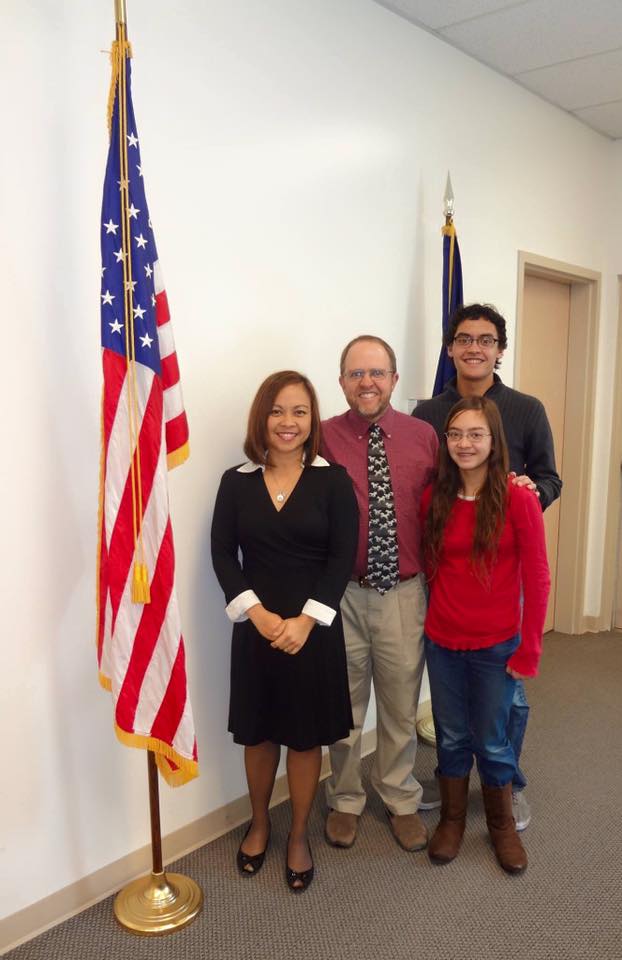 My husband, children and I at my swearing-in ceremony

My parents called me from Old Lincoln Highway asking where city hall was. “Is it by the library?” my mom asked, and I told her it was. So, having overshot their destination, they headed back to the “horse statue” I described and got there before everyone else did. Such a simple act that others could take for granted, but my dad has been battling cancer for a few years now, and he’s tough, but mostly too ill to travel. The fact that he made an effort to come today with my mom from Taylorsville for my swearing-in was pretty amazing. And deeply appreciated. It is one of those moments as his daughter that I was glad I could make him proud.

All told, this was my “party”: my parents, their friend Rin, my husband Drew, my children Wesley and Sabrina (who left class early to be there; my daughter Sierra is serving a mission in the Philippines or she’d have been, too), Drew’s parents, and four adorable Filipina friends of mine who drove from Salt Lake. It was a good thing they got there early as we did a lot of photo-taking. Must be a Filipino thing. 🙂

There were, of course, all these other people in the audience, a lot from the city and great community members to witness the swearing-in of myself, Krista Sparks and Neil Critchlow. I wish I could have shaken hands with everyone, but by the time photos were done, there wasn’t time.

The mayor called us all up, and the three of us stood in front with our right hands lifted in the air, while the judge asked us if we would uphold the constitution. At that moment, right before answering, I felt both terrified and determined to live up to that charge. For such a simple question, it was as though the whole world was watching for me to trip up…but we answered, and it was over. The judge asked us to sign our oaths on the table, in blue ink no less (why blue, I don’t know), and then it was over.

Almost anti-climactic. And yet, in its simplicity, very fitting. You make a promise and start working the next moment. I have my iPad from the city, with Wednesday’s agenda uploaded, an ordinance spelling out rules of conduct, and work ahead already. It was a moment’s pause, to enjoy ceremony. Ultimately, what matters isn’t the pomp and circumstance, but just good, honest work over the next four years.

Steve Howe of the Transcript called me today for an article to ask how I felt about assuming office, if I have any anxiety over anything. I told him I was just mostly excited. Excited to learn, to listen, to weigh in, to see how the cogs in local government operate. It is going to be one heck of an adventure, and I welcome it with open arms.