Pink Think: “Hope is the thing with feathers that perches in the soul – and sings the tunes without the words – and never stops at all.” – Emily Dickinson 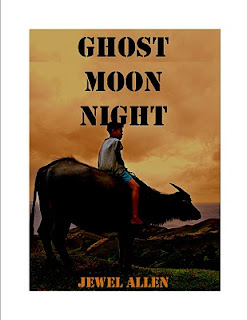 My dream cover of Ghost Moon Night. Photo of water buffalo and boy is by amel murillo on flickr.

I am requerying my young adult fantasy novel Ghost Moon Night thanks to a recent personalized comment by an agent. She said my concept was interesting especially the part about the water buffalo who snorts when happy.

She passed on it, but thanks to her, she made me think of what my novel is all about. That I really should capitalize on its tropical quirkiness. So I changed the first chapter, drawing from a later scene in the book, and requeried some agents. A few hours after I sent a batch, I got an email from a big-name agent requesting the full manuscript.

The difference: a query letter revised numerous times and a first chapter that I think better captures the voice of my 17 year old main character. I edited like crazy Saturday and emailed it out Monday.

***
How I described Ghost Moon Night:

One night a month, the residents of a Philippine town have to shut all their windows and doors to ward off langbuan, winged undead, brought on by the ghost moon night curse. Seventeen-year old Antonio volunteers to break this curse, even though he is possibly the worst person to help his town. After all, he steals and lies, and he’s not above cheating his employer to get his coveted record player. However, this is his chance for redemption, and a cash prize sure doesn’t hurt. So he enlists the help of his best friend who plays coconut basketball, a tomboyish girl who dislikes him, and a water buffalo named Cupid who grunts when happy.

But it’s not easy. He has to decide if it’s worth fighting the town’s revered elder who wants to keep the status quo even as the langbuan grow in numbers and get more audacious. Will Antonio’s quick wits – and his sidekicks – be enough to break the curse, before the curse breaks him and his entire town?