Skip to content
Home » Blog » music » Heroes With A Heart

Pink Think: “A hero is somebody who is selfless, who is generous in spirit, who just tries to give back as much as possible and help people. A hero to me is someone who saves people and who really deeply cares.” – Debi Mazar 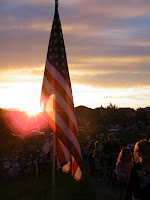 Interestingly enough, I got inspired to write this song on May 1, 2011, the day Osama Bin Laden was reportedly killed.

That Saturday, I was in the airport waiting for my flight when a group of sailors and their families walked past, one of the sailors holding onto a child in each hand. One sailor kissed a pregnant woman goodbye. There was a round of applause, then the sailors boarded their flight while their families started walking out of the terminal without their sailor. One mother’s shoulders were hunched over as though in physical pain. I will never forget that moving experience.

My THANKS goes out to our hard-working troops and their families for all their sacrifice to protect our freedoms.

VERSE
Was waiting for my flight today
When this young couple came my way
She had a flower in her hair
He held her hand with greatest care.

He wore a sailor’s navy blue
She wore a ring that looked brand new
They kissed goodbye, it made her cry
As he left to catch his flight.

CHORUS
These are people, going out to war
Not just numbers, but fam’lies torn apart
Someone’s father, mother, someone’s child
These are heroes, heroes with a heart.

VERSE
A soldier’s troop came into view
Hand in hand, their children, too
Their mothers fol’wing close behind
Their spouses walking by their side

The soldiers got some warm applause
Their goodbye’s coming to a close
A mother left with her head bowed
She tried so hard to not turn ’round.