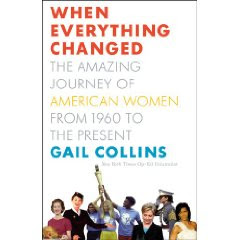 [Read all the way down the post to see how you can win your very own copy of this awesome book. ]

From the back cover: “When Everything Changed begins in 1960, when American women had to get their husbands’ permission to apply for a credit card. It ends in 2008 with Hillary Clinton’s historic presidential campaign.”

Collins’ makes the time period come alive through anecdotes and stories of ordinary women, like Gloria Vaz, an African-American mother in Brooklyn alongside more famous women like the other Gloria – Gloria Steinem, one of the leaders of the women’s movement.

I didn’t know much about these historical figures and how they shaped the feminist movement. I’d just assumed that some of them were shrill, obnoxiously militant and denigrating of the traditional housewife. It didn’t help that they sent out mixed signals: for example, Gloria Steinem had a penchant for high heels and short skirts even as she supposedly wanted to be taken seriously. But they still made for a fascinating read. And I am grateful to them for laying the groundwork so women have more opportunities today.

***
Okay, for the giveaway. No PO Boxes; US and Canada addresses only. A winner will be chosen by random drawing. By Friday, October 2, leave me a comment answering this question:

If you could spend a day at the amusement park with a woman (alive or dead), who would it be?

My pick: my older sister who now lives in Ireland.